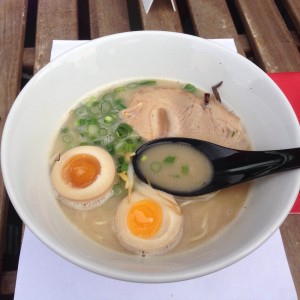 Through a friend of mine, I have been asked to test out ramen noodles for a new restaurant that will open later this year. I have been visiting this very enthusiastic ramen chef’s house to give my opinions.. They have been working hard towards the launch and they have super cute logo and very nice name – Monohon (means real stuff, but also in a professional tone)

This time, he went public for the first time organising a pop up restaurant night at a nice Japanese cafe Tokonoco by the Regent’s Canal.

I went early with a friend of mine who has just spent 6 months in Japan, who also loves Ramen. There were two types of Ramen in the menu. He ordered Shoyu (soy source) Tonkotsu and I ordered Shio (salt) Tonkotsu. I prefer ordering the most simplest Ramen when I want to taste the stock usually..  I wanted to taste Tonkotsu!

Soup: 1/5
It is Tonkotsu base, but it simply lacked taste and saltines. It may not be just the salt but it has very weak in its taste. The soup was not hot enough when it was served.

Noodle 3/5
It is a good quality noodle. It is not powdery as it used to be. But it had some strange slimy feel to it. I prefer hard texture like Al dente pasta on my tongue.

Toppings 4/5
Chyasyu (pork) is very good and egg was very nice, except it was cold inside.

Price 5/5
It is still a special price, £9 including Edamame is very good for London.

I also tried Shyoyu Tonkotsu which my friend ordered. It was too fishy, a bit like Oden stock. It is perhaps that the direction of both soup is pointing to a wrong place. When I feel some average ramen (such as Tonkotsu in London), at least I can sense where they are trying to reach. With this Ramen, the place where it is trying to go is not where (I personally feel) good ramen is.
In the order of importance of what goes in Ramen, I think 50% is soup, 40% is the noodle, and rest is topping.  He needs to get the soup right.

Overall 2/5
I hope they will improve by the time it opens. Let’s just wait about the bankruptcy judgement until it is officially open.
Monohon (not officially open yet)
http://www.monohonramen.com/
https://www.facebook.com/monohonramen